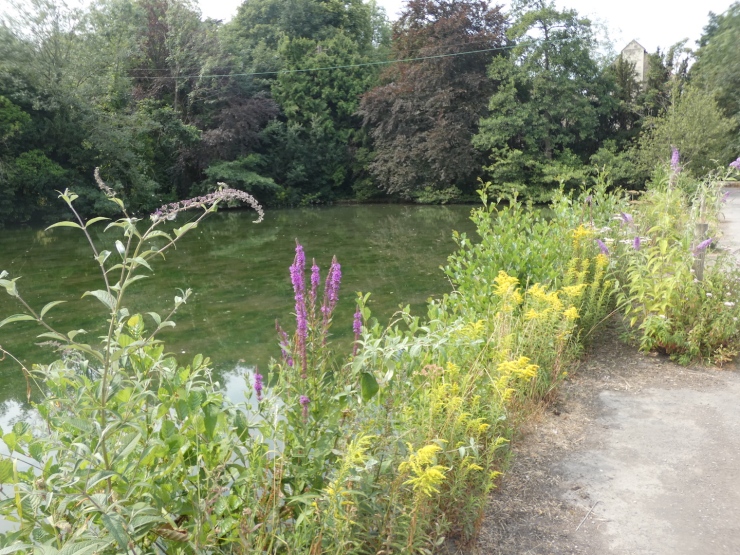 Less than a metre wide, a strip of plants emerges each spring and summer to line the edge of Fromehall Millpond where it meats the tarmac of Lodgemore Lane. It runs the entire length of the pond and is a magnet for wildlife. While the millpond attracts its fair share of wildlife, it does not have any emergent vegetation on three of its banks. One is part lined with timber piling.

For many years this strip was cut down regularly during the growing season without reaching its full potential. In the eyes of some, the plants made the site untidy. The owners of the millpond agreed not to cut it and allow it to grow. As a consequence, it has been a delight, attracting a variety of insects and consequently birds and providing shelter for small fish fry in its shade. 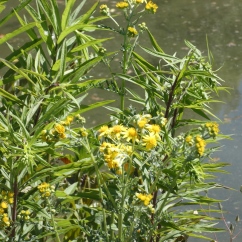 This summer we counted over 30 individual plant species. The tallest and most visible are Purple Loosestrife, Golden Rod, Hemp-agrimony and Buudleia, all great plants for insects. There is also Meadowsweet and St John’s Wort There are stands of Alder, which will need keeping under control. Growing closer to the ground there are ferns and small bramble stems that hold a few blackberries in the late summer and autumn.

The Hemp-agrimony and Golden Rod are alive with bees and hoverflies. Bugs and beetles move along the stems and among the leaf litter, butterflies visit the buddleia and other plants, including Holly Blue, Comma, Small Tortoisehell, Red Admiral. Common Darters wait on their favourite perches before darting out over the pond to catch their prey. Meanwhile a pair of Emperor Dragonfly hunt over the water, flying up and down the banks close to the plants. Below the plants, close to the bank edge there are lots of Stickleback and other small fish fry.

Stroud Nature will be working with the owners of the pond, WSP Textiles, to ensure that this narrow strip of plants remains attractive to wildlife, while also ensuring that the stability of bank is not damaged in any way. We have produced an interpretation panel with the support of WSP which has information on the millpond and the River Frome which runs beside the pond.